Freehand laces with a snake pattern are found over a large area that includes Denmark, Sweden, Finland, Russia, Bohemia, Slovakia, Austria and Italy. The Italian peasant lace illustrated in Plate XXIII of the 1984 Dover edition of The History of Lace by Mrs Bury Palliser is a good example of the snake pattern, and the picture is clear enough to use as a guide for reproducing the lace.

I first made a rough sketch from the photograph (above, left), marking the paths of pairs in the snake trail and cloth-stitch circles, also where there would be kiss stitches joining the trail and circles to the foot/headside and fixing (turning) stitches within the trail. As far as I could tell there were two passive pairs at each edge, but it was difficult to see exactly how the looped plait and picot edge had been worked. From measuring the photograph I decided that a vertical spacing between pins of one square of the check fabric on my pillow (4 mm) would be about right, with a horizontal spacing of eight squares. For thread I used a hank of old 3-ply linen (20 wraps/cm) from my stash, but was prepared to alter the setting of the pins if it proved to be either too thick or too thin.

I started by setting in both edges and working the snake trail so that it was joined to both sides. With one passive at each edge this took eighteen pairs (above, right), which were as many as I felt happy with, so I decided against working the plait and picot edging. In my first sample (below) I opted to work cloth stitch and twist rather than just cloth stitch (ctc) with the passive edge pairs and to use pins on the inner edge of the foot/headside where necessary. As is usual for freehand lace I used the ‘open’; method of working where pairs are left untwisted, so cloth stitch and twist is tctc (instead of ctct). I found that I needed to ease threads into place as I went along — working a large number of stitches and then trying to tighten everything up was difficult and unsatisfactory, but I was pleasantly surprised by how well both the snake trail and the circles worked out. The way in which the circles are worked with the worker pair exchanging with a passive pair is typical for cloth stitch motifs in freehand lace.

I later worked a sample where I used cloth stitch and fixing stitches (ctctc) instead of pins at the inner edge (below). This sample needed twenty pairs (one extra passive pair at each side) and I used a thicker linen thread (15 wraps/cm). 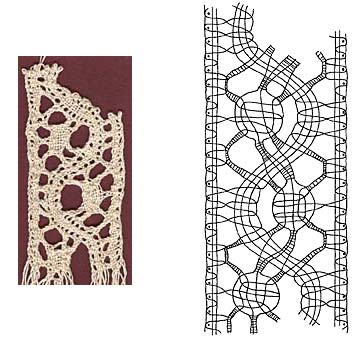