Lace for a royal wedding 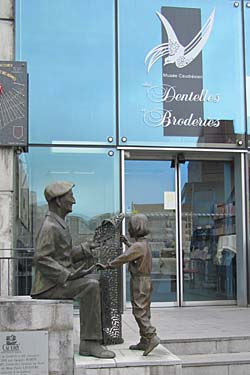 There was considerable discussion about exactly what sort of lace had decorated the wonderful wedding dress of the Duchess of Cambridge on her marriage to Prince William in 2011. I was vaguely aware that French lace was involved, but it was not until a visit to northern France for the Vème Biennale Internationale at Sebourg later that year that I discovered that the lace had been made in Caudry, only about 20 miles from where my husband and I were staying. As the Caudry Lace Museum is open on Mondays, we were able to visit it on a detour back to Lille, where we were catching the Eurostar train home.

We knew we were in the right place when we saw an old Leavers lace machine on a roundabout coming into Caudry, and managed to follow the signs to the museum, which is in an old lace factory built in 1898. On the ground floor we found a Leavers lace machine — made in Nottingham — which we could have seen in action if we’d visited later in the week. 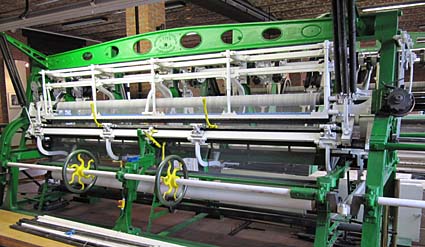 Upstairs we found a very stylish exhibition, ‘Lace, Fashion Phenomenon’, with items from the museum’s permanent collection, a temporary exhibition of lace accessories, and — what we had hoped to see — a display about the lace used for the royal wedding dress. 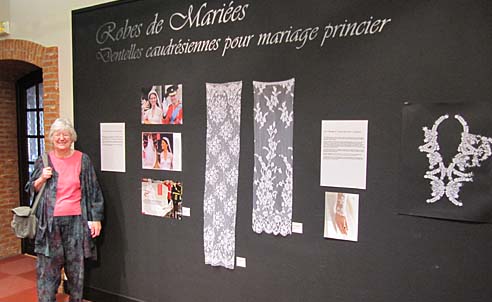 The display included an explanation — which I have translated and summarized below — of how the lace was used for the dress. 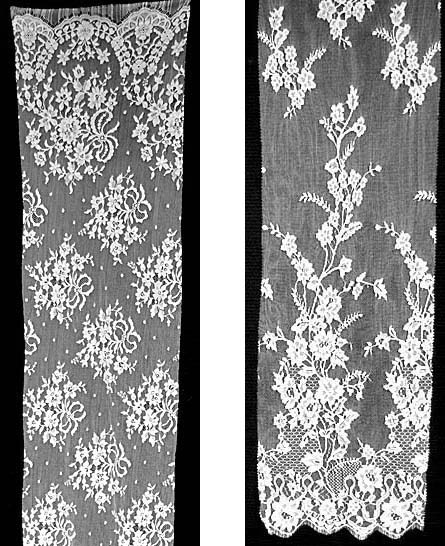 The lace shown above left — Leavers 12 point made by the company Sophie Hallette — was used on the dress; and the lace shown above right — Leavers 9 point made by the company Ets Solstiss — was used on the skirt of the dress and the train. However, the lace was not used as you see it here. Instead the floral motifs were cut out and re-arranged to achieve the effect required by the designer, Sarah Burton. They were then stitched in place on silk net by expert embroiderers from the Royal School of Needlework. The little ‘bows’ and flowers, that can be seen at the top of the detail from the lace made by Sophie Hallette (below, left) were used around the neckline of the dress. The mock-up of how these motifs were re-arranged (below, right) makes this clear. 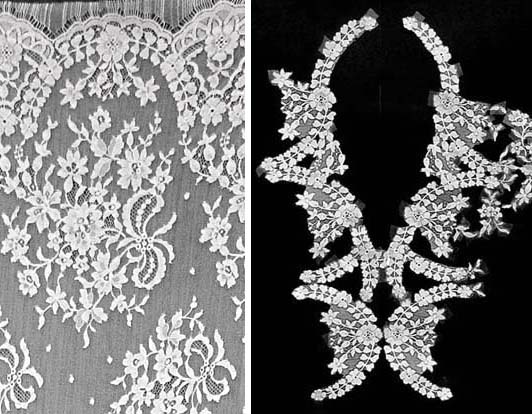 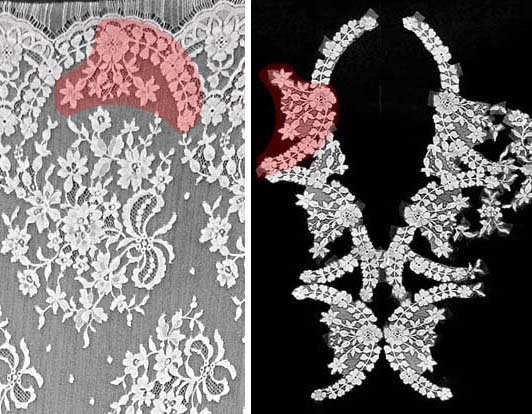 Highlight bows and flowers:   Off On 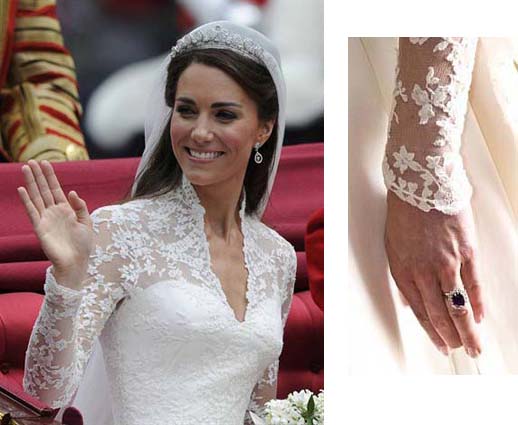 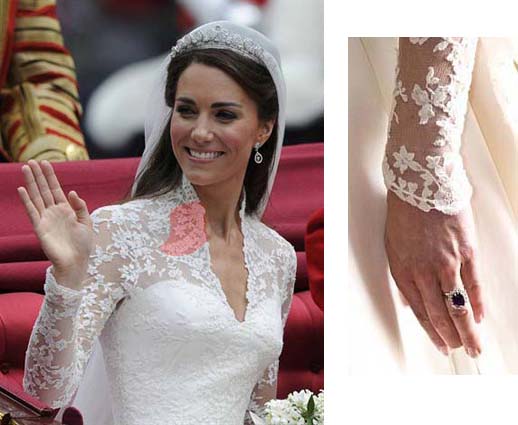 The lace on the dress itself (left) and the detail from one of the sleeves (right) showing the little ‘bows’ and a flower from the lace.

Apparently other machine lace was also used to decorate the bride’s and bridesmaids’ dresses, and according to a BBC report on 12th May 2011 this included some English lace made by the Cluny Lace Company in Ilkeston, Derbyshire. This was used on the underskirt of the bride’s dress, on the train, around the neck and sleeves of the bridesmaids’ dresses and for their underskirts. Unfortunately I have been unable to find photographs showing details of this.

The Financial Times (London) published an article on 2nd July 2011 which mentioned the Sophie Hallette company in reference to the lace on the wedding dress:
Sophie Hallette, the family-run lacemakers founded in 1887 and based in Caudry, France, supplies brands from Dior to Givenchy and Alexander McQueen, and created the lace used in Kate Middleton’s dress. “The popularity of lace goes in waves,” says Romain Lescroart, its chief executive. “There’s a cycle that seems to happen every seven years. But thanks to Kate we’ve gone into extra time.” The company had no idea that the silk tulle woven with shamrock, roses and lilies commissioned by McQueen would be used as a ‘canvas’ for Royal College of Needlework workers to customise — cutting around the motifs and reapplying them to create the décolleté, sleeves and train of the royal gown. Since then things have gotten a little crazy. The company has seen exports rise and waiting lists explode. When it comes to this kind of lace, there can never be a rush in production. It can take three men two months to set up the 100-year-old British Leavers looms required for a pattern (such as the one previously known as number 950264 and now as Kate’s) and they can only produce 60 m of lace a day.