I was first shown this braid by a Greek lady on a bus in the Czech republic. Later a friend who’d grown up on one of the Scottish islands told me that she’d made the same one as a child. It was a useful and easy to make cord but it didn’t have a name. Discussion on the Braids and Bands email list has revealed that it’s found in several countries, often without a name although several were suggested including finger knitting, monk’s cording, and idiot’s cord.

The two methods give different structures — the second one is triangular, the other more rounded. This shows up well when the braids are worked with two colours. Both methods start with a slip knot on one of the strands. I find I can get a better rhythm going when using the first method. 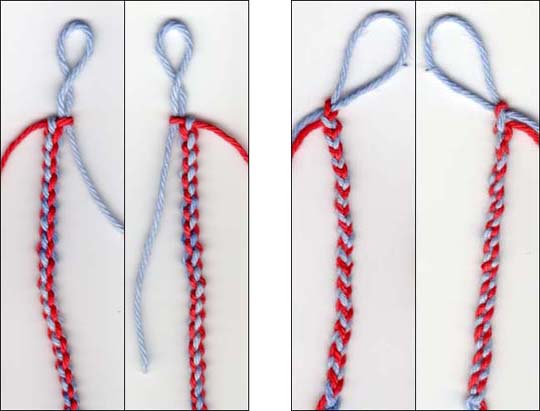 1. Take 2 under 1 and push a loop of 2 through the loop on left index finger.
2. Drop the loop of 1 and pick up the loop of 2 on the same finger (left index). Pull tight — you will probably need to pull on both strands.