This Chinese dragon is very different from most of my other lace, both in subject and style, but all the lace techniques in it are ones I have used elsewhere. This contrast of the familiar with something foreign does, in fact, fit very well with the idea from which it arose, the story of which you will find below. 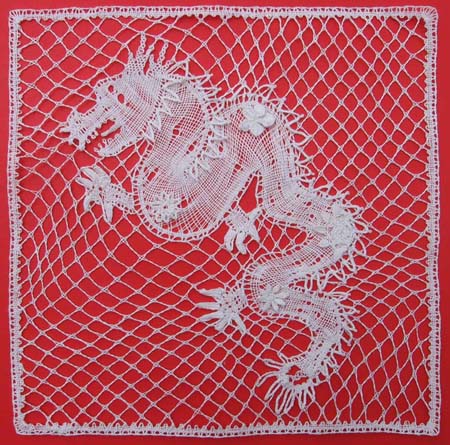 A few years ago I received an email from Eloise Dalby, a fourth year visual communication student at the Glasgow School of Art, who was wondering if I could help her with her current project. It was called ‘Translate’, and covered the cultural differences between ‘eastern’ (specifically Chinese) and ‘western’ (European) cultures. She was aiming to portray symbols from each culture in crafts that are unique to the other: for the Chinese one she was going to use traditional paper cutting techniques, for the European one she was hoping to use lace. 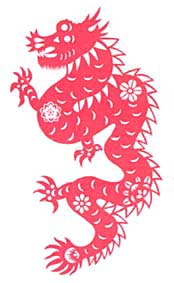 Later that week I met Eloise to find out more about the sort of lace she would like. And after chatting for a while I found myself agreeing to make her a Chinese dragon in lace before the end of May! She had already arranged for someone to make a Chinese paper cut of a British heraldic lion.

Eloise gave me a picture of a Chinese dragon and after enlarging and rotating it so that it would fit better in a 21 cm square (the size she wanted), I set to work using some 66/3 linen which seemed about right for the scale of the piece. The deadline meant that there was no time for sampling and the only definite idea I had was that I would work the dragon first and then the ground and frame around him. He was finished on 19th May, just over two weeks after I started and in time to hand over to Eloise well before her deadline. I later heard from her that the dragon had been an absolute hit with her tutors and everyone that she had shown him to. At the School of Art Degree Show in June I was able to see him together with the Chinese paper-cut lion and talk to Eloise about this and the other parts of her display.

My dragon and the lion on display at the Degree Show 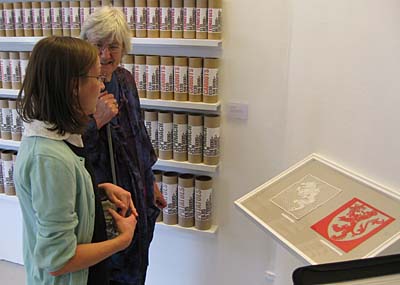 Discussing the dragon and lion with Eloise. 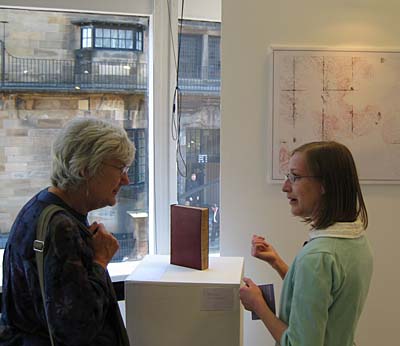 Eloise telling me about another part of her display. The main building of Glasgow School of Art, designed by Charles Rennie Mackintosh, can be seen in the background.

The head was worked first from the tips of the horns to the nose (my first idea of using tallies for the horns did not work, hence the pattern on top of the blue film covering up the first lot of pinholes). For the eyes I employed a technique suggested to me by Jacquie Tinch. The tongue was a tally and the teeth were picots. Pairs were sewn into the head for the body. I had thought of using some Milanese braids here, but as the body was nearly all curves, which I worked as Milanese scroll turns, I quickly abandoned that idea. The feet came next worked from body to claws. 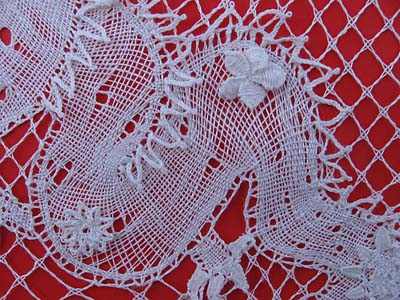 Detail showing spikes and two of the flowers.

For the ground I used a hand-drawn gird which I felt complemented the curves of the dragon better than a straight one would have done. After that I only had the spikes along his back (plaits with picots) to do before taking out the pins and tidying all the ends (the worst part of the whole thing). The final touch was the four flowers worked separately and stitched in place.